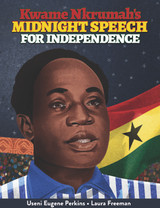 "Essential reading for any and all future (and current) freedom fighters." Kirkus Reviews - starred review

On a humid March night in 1957, Kwame Nkrumah made history. While thousands of people cheered, including dignitaries from round the world, he announced his country's independence. After many years of British rule, Ghana, formerly the Gold Coast, became the first sub-Saharan African nation to break free from colonial rule.

With prose by renowned poet-activist Useni Eugene Perkins and illustrations by Coretta Scott King Honor winner Laura Freeman, Kwame Nkrumah’s Midnight Speech for Independence captures the grandeur of the momentous night Ghana was declared a free nation and the remarkable life of one of Africa’s most celebrated leaders.

A biography of Ghana’s first prime minister and the story of his country’s road to independence.

The book opens with Kwame Nkrumah gazing at the British Union Jack while waiting alongside thousands of spectators. The Adinkra symbol for fawohodie (independence) is patterned into the blue of Nkrumah’s shirt and also in the stands that hold the crowd waiting to see, at the stroke of midnight, the joyous raising of the red, yellow, and green flag with a black star embedded in the center, the flag of a sovereign Ghana. Nkrumah’s proclamation, “And thus Ghana, your beloved country is free forever,” helps introduce the story of a tenacious man who fought for and gained freedom for his homeland. Illustrations of Nkrumah speaking, learning, and listening at various stages of his life are intentional and bold, chronicling the journey of an activist determined to speak out against British imperialism. Freeman uses bright colors and prints to find focus in her artwork. In one double-page spread a shadowed profile of Nkrumah is positioned opposite an image of the African continent rendered in different kente patterns, Nkrumah’s powerful words linking Ghana’s freedom with the liberation of all African countries from colonialism. Thoughtful backmatter that includes a timeline of Nkrumah’s life and accomplishments shows the care poured into sharing the words and works of a leader dedicated to his country and his people.

Essential reading for any and all future (and current) freedom fighters. (author's note, glossary of Adinkra symbols) (Picture book/biography. 5-9)

$18.99
We Rise, We Resist, We Raise Our Voices Edited by Wade Hudson & Cheryl Willis Hudson: Foreword by Ashley Bryan
Add to Basket
Add to Basket
Just Us Books

$16.95
Journey, Poems By Wade Hudson Published by Third World Press Journey is a collection of poems that offers a reflective look at various periods and e
Add to Basket
Add to Basket