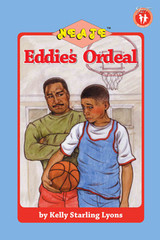 Thirteen year old Eddie Delaney loves his dad. But sometimes he wishes that he'd lighten up. His father, a lawyer who grew up during the civil rights movement expects nothing but the best from his only son. And with Eddie’s success as a starter on the basketball team, and his good grades, Mr. Delaney’s been getting it. Then Eddie brings home a D in language arts and everything changes. His parents make him quit the team. And now Eddie’s lost the one thing he knows he’s good at, the very thing that had helped bring him and his dad together. Why is his dad so hard on him? Eddie’s friends decide to find out. But when they dig into Mr. Delaney's past they uncover a secret that rocks the foundation of the already unsteady father-son relationship, and changes Eddie’s life forever.

Eddie, 13, is thrilled to make the school basketball team, but when his grades slip, his dad is furious and makes Eddie quit the team. Tension builds until father and son are barely speaking. But why is Dad so angry? Is he hiding a secret from his past? The fourth book in the series about five friends who hang out together focuses mostly on Eddie, though there is also a lively subplot about Liz, who bonds with the cool new girl, Jasmine, and then becomes jealous of Jasmine's success. The therapeutic stuff is occasionally overdone ("I hear you, and I understand"), but there's plenty of building tension as Dad's secret is revealed and Liz competes with Jasmine in the talent show. The talk is casual and contemporary, and readers will like the family drama as well as the warmth among friends and the realistic view of failure and success. Booklist