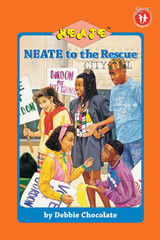 NEATE Book 1: NEATE To The Rescue

Naimah, Elizabeth, Anthony, Tayesha and Eddie are NEATE. In this first book of the series NEATE helps Naimah and mother with their respective political campaigns. Naimah is running for class president and her mother is seeking a city council seat.

NEATE is an acronym for Naimah, Elizabeth, Anthony, Tayesha and Eddie--African American friends who, in this first book of a series, campaign for the reelection of Naimah's mother to the city council. It's a bitter struggle between the respected woman and her white male opponent, an unabashed racist who advocates the re-zoning of community districts to quash African American voting power. Naimah and her pals, realizing that every vote counts, fervently urge their adult neighbors to cast their ballots. They also stage an exuberant rally for children, encouraging them to join this important cause. Chocolate's timely story dramatizes the electoral process, unfair political tactics and blatant prejudice, and should strike a responsive chord among socially aware youngsters. The novel's contemplative tone (though a bit at odds with the sprightly cover artwork) renders it a cut above the typical mass-market YA offering. Publishers Weekly

This is the first book in a new series about Naimah, Elizabeth, Anthony, Tayesha, and Eddie. It moves slowly, perhaps because Chocolate spends so much time introducing her characters. There is a lot of description and little action or dialogue. The plot centers around Naimah's mother's reelection to the City Council, just after she has lost a redistricting fight. Chicago place names are used, but the setting is an indeterminate middle-class, urban, African-American community. There are several strong scenes, especially one in a homeless shelter and another involving Naimah's speech for the Student Council election, but future books in the series will need to show more and tell less if they are to succeed. School Library Journal