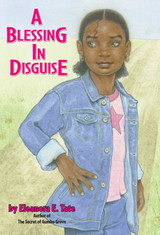 SKU:
A BLESSING IN DISGUISE

A Blessing In Disguise

Written By Eleanora E. Tate
Life in itsy bitsy countrified do-nothing Deacon's Neck is plain and boring to 12 year-old- Zambia Brown. Living with Aunt Limo, Uncle lamar, and nerdy cousin Aretha is all church, chores, and chump change. But when Zambia's father, Vernon (Snake) LaRange, opens a hot new nightclub down the road, things get more interesting. The neighborhood is up in arms, but Zambia has visions of living large now that Snake is nearby. He;s got fine cars, flashy jewelry, and loads of cash. And no matter what her aunt and uncle say, Snake must want Zambia in his life, too...right?
Reading Level: Ages 9-12; Paperback: 192
Published by Sankofa Books, an imprint of Just Us Books
Reviews
The witty and sassy-but sadly innocent-voice of narrator Zambia Brown instantly grabs readers' attention in this concluding volume of the trilogy begun in The Secret of Gumbo Grove and Thank You, Dr. Martin Luther King, Jr.! For the past eight years, ever since her mother entered the hospital where she remains even now, 12-year-old Zambia has been raised by straitlaced Uncle Lamar and Aunt Limo in "itsy-bitsy, countrified, do-nothing Deacons Neck" on the South Carolina coast. She daydreams about moving in with her slick, shady-dealing father, Snake, who lives with "a lady named Sissy" and their 15-year-old twin daughters. When Snake opens another of his "boss" nightclubs on Zambia's block, Lamar, Limo and others in their African American community are up in arms. But Zambia is dazzled-longing desperately for a shred of love from Snake, she stops just short of self-destruction in her attempts to attain it. Snappy dialogue convincingly suggests these characters' love of life, against which Tate artfully, and disturbingly, juxtaposes darker feelings-"I'd give anything to see a shooting," Zambia declares-and real tragedy. Publishers Weekly
Zambia Brown, 12, is black and lives in Deacon's Neck, SC, with her aunt and uncle. She thinks her father, Snake, who is involved in a number of criminal activities, and her two older half sisters are exciting, and would love to live with them. She thinks the town is dull; she thinks her uncle and aunt are dull. To gain acceptance from her neglectful father, who is practically a stranger to her, she would do anything he asks. When given a choice, she opts to live with him, and he disappoints and humiliates her. Along the way, Zambia learns some valuable lessons about responsibility and caring, about loyalty and honesty. In the end, she learns to appreciate her uncle and her aunt and to recognize that a community has to be protected from those who would destroy it, no matter who the would-be destroyers are. This is a timely book that speaks to the subject of drugs and crime in a rural Southern town, and a valuable addition to most collections. School Library Journal
Reviews

SKU:
A BLESSING IN DISGUISE