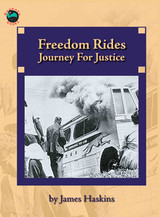 Freedom Rides: Journey to Justice is a thorough review of the monumental struggle to end segregation in public transportation in America. James Haskins’ vivid detail and moving descriptions bring to life the sacrifice and bravery of the people who tested the Supreme Court decisions that legally desegregated U.S. buses and trains. In presenting famous civil rights leaders and introducing lesser-known heroes, this volume provides a balanced and insightful discussion of what the Freedom Rides were, and why they were so important to the civil rights movement, and to the history of our nation.

The author movingly describes the sacrifice and bravery of the people who tested the series of Supreme Court decisions desegregating buses and trains in this readable look at the Freedom Rides and their legacy. Important individuals of the civil rights movement, such as James Farmer and Martin Luther King, Jr., are discussed, as are the unknown people who put their lives on the line in the name of justice and equality. Good-quality black-and-white photographs are scattered throughout. Haskins has once again given YAs an important source of information on African American history with this well-researched, well-documented book. School Library Journal

"Segregated transportation was in some ways the hardest type to endure, because it was so public." Haskins focuses on the bitter struggle to integrate buses and trains in this general overview of the nonviolent civil rights protest movement. The writing is undistinguished; what will keep kids reading are the personal accounts of people who were there. Haskins draws on diaries and memoirs as well as newspaper reports; he names names, places, dates. People bear witness to what it was like to face beatings, imprisonment, even death for the right to get on the bus and choose a seat. Some admit to being too scared to go through with the confrontations. Rosa Parks is here and so is Martin Luther King Jr., but Haskins has also drawn on the experiences of ordinary people, black and white, who found the courage to fight for us all to ride free. Many kids will go on from here to read the titles in the bibliography and notes; photos to come..

"Excellent survey of the events which prompted the freedom rides, and their ultimate impact on the movement for civil liberties." -- Midwest Book Review