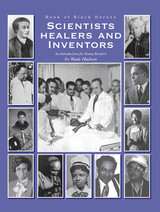 (Signed copies available.  When you place your order. please indicate to whom you would like the book autographed. There is an Order Comments box below your shipping preference.)

In this volume of the popular Book of Black Heroes series, readers will learn about the many contributions Black men and women have made in the areas of science, medicine and creative invention. Short entry biological sketches herald the ground breaking work of well-known Black heroes such as scientist, George Washington Carver and surgeon, Dr. Daniel Hale Williams, and introduce the trailblazing accomplishments of other Black heroes such as inventor Lewis Latimer and Halle Johnson.

Here's a book that's better for its breadth of coverage than for its depth. Hudson's vignettes about a wide variety of African Americans in the scientific community introduce a number of distinguished men and women who may not be generally known. Familiar names are here, too: Benjamin Banneker, George Washington Carver, Mae C. Jemison. But few readers will know Halle Tanner Johnson, the first nineteenth-century woman to practice medicine in Alabama, and Andrew Beard, a freed slave who invented the automatic railroad coupler. Perhaps most interesting, however, are contemporary figures such as Bluford Guion Jr., an aerospace engineer; Dr. Clarice Reid, who has devoted her life to helping people with sickle-cell anemia; and Benjamin Carson, one of the top neurosurgeons in the country, who are role models readily identifiable to today's kids. The format is plain; each subject gets one page, highlighted by a photo or drawing. Oddly, it's sometimes the older figures who get photographs, while the more recent subjects are shown in drawings. A useful book to have on hand. Booklist