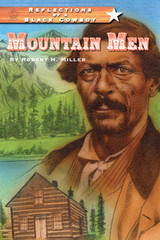 The exciting adventures of Black cowboys, pioneers, soldiers, and other frontiersmen join the celebrated folklore of the wild West in the Reflections of a Black Cowboy series. Through colorful, masterfully crafted vignettes that rival tall tales of the old frontier, author Robert H. Miller shares stories of important real life heroes—men and women whose bravery and adventurous spirits helped make the American West possible.

Book 4, Mountain Men introduces:
• Esteban, who came to America from Morocco as a slave, and was the first African to land in New Mexico and Arizona territory
• Jean Baptiste Point duSable, Haitian born Frenchman who founded the city of Chicago
• James Beckwourth, an African American who became Chief of the Crow Indians
• George McJunkin, whose discovery of the Folsom Site in New Mexico proved Native Indians’ presence in North America dated back 10,000

Published by Sankofa Books, an imprint of Just Us Books

The third in Miller's "Reflections of a Black Cowboy'' series introduces such nearly-forgotten figures as York, a slave who guided the Lewis and Clark expedition; Pony Express rider George Monroe; Ed Rose, known as ``Cut-Nose'' after Mike Fink bit off that appendage in an epic battle; and Biddy Mason, who spent most of her life as a slave but ended up as a wealthy citizen of Los Angeles. In the persona of an old black hermit up in the hills talking to his dog, the author tells his tales informally, basing them on published accounts (there's a solid bibliography) but supplying his own dialogue and detail. Linoleum prints effectively dramatize the high spots. Lively historical writing, despite the invented speeches and hokey narrative device. Kirkus Reviews