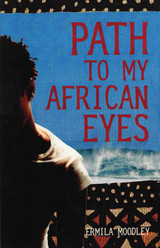 SKU:
PATH TO MY AFRICAN EYES

Path To My African Eyes

When her father is transferred from his position as a professor at a Capetown, South Africa university to Buena Vista, California, Thandie Sobukwe says goodbye to her friends, family and favorites places and hello to self-doubt, rejection and cultural confusion. Everything from the way she looks to the way she speaks, and even the way she thinks is questioned, mocked or simply misunderstood. Thandie's struggling to be comfortable in her skin, but between her California girl dreams, ambivalent feelings about Black American culture, and sensitivity about the ethnic background she thinks makes her stand out too much, she doesn't seem to fit in anywhere. Thandie's facing a real dilemma: How can you be true to yourself when you're trying to discover who you are?

What are they thinking? That my home is a jungle? Complex identity issues of race, class, color, and nationality drive the plot in this lively contemporary story of Thandi Sobukwe, 14, from Cape Town, South Africa, who comes with her academic parents to Buena Vista, California, and finds friends and enemies as she tries to work out who she is. Furious at the taunts and stupid questions directed at her about Africa as if the whole continent is one primitive place, she is still not sure about becoming a true California babe and she is ashamed when she succumbs to peer pressure to get her hair relaxed. Moodley, now a teacher in California, was part of the Black Consciousness resistance movement in South Africa, and she writes with subtlety and depth about growing up black in both countries. The book is more message than action, but the peer-pressure scenarios will grab teens, who will want to talk about Thandi's surprising turnaround as, yes, she embraces her Xhosa roots. --Booklist

Newly arrived in California where her father will be teaching at a university, 14-year-old Thandi is embarrassed by her South African background and her black features. The Africa her classmates know and sometimes put down is not her modern Cape Town world. She resents her mother's insistence on natural hair and her teacher's assignment of a report on ancestral roots. She is torn between new cool friends and a geeky boy who'd like to be a boyfriend and who shares her interest in scientific invention. Uncomfortable with parts of black American culture, she doesn't know where she fits. Although the message is somewhat obvious, and the language too literary for a high school freshman, the author, herself a South African immigrant, has clearly delineated issues facing young African students in this country as well as those of any teen entering a new school in the middle of the year. Many girls will recognize Thandi's conflicts with her parents and her longing to fit in, and celebrate her progress. School Library Journal

SKU:
PATH TO MY AFRICAN EYES