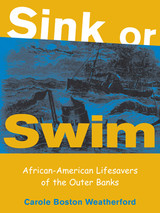 Sink Or Swim: African-American Life Savers Of The Outer Banks

When ships were in trouble off the treacherous coast of North Carolinas Outer Banks, the courageous black lifesavers at Pea Island Station were first on the sceneand in the water. Through raging storms, pitch-black nights, and hurricanes, these surfmen performed amazing, death-defying rescues. For over seven decades, the intrepid crews battled fierce waves and racial prejudice. Ultimately, they received the recognition they richly deservedin 1996, more than a century after they broke the color barrier. Sink or Swim: African-American Lifesavers of the Outer Banks is the story of their heroism, their struggle, and their triumph.

With dozens of historic prints and photographs, this documentary history is the first book about the U.S. Lifesaving Services only all-black crew. Spanning slavery times, the Civil War, Emancipation, Reconstruction and the Jim Crow era, Sink or Swim recalls this little-known chapter in American and North Carolinian history. Mixing adventure and social discord, the informative, action-packed narrative will enhance young readers understanding of coastal conditions and how slavery and other racial barriers affected African Americans lives. Readers witness violent storms, courageous rescues, tragic losses, and the lifesavers ultimate victory over prejudice. Their story is both powerful and empowering; in fact, it was said that Alex Haleys next project, had he lived, would have been to tell the Pea Island surfmens tale.

"Carole Weatherford has written a powerful narrative...of courage and compassion...This bit of history, not located in other history books, is worth reading by youth and adults alike. All--regardless of ethnicity--would benefit from this story describing the struggles and heroic deeds of some African-American males who took pride in making their contribution to the development of America." -- Bertha Todd, Co-Chair of Wilmington's 1898 Centennial Foundation--a non-profit corporation