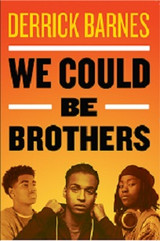 SKU:
We Could Be Brothers

We Could Be Brothers

In this middle grade novel by Derrick Barnes (Crown, King of Kindergarten, Ruby & the Booker Boys), two thirteen- year-old African-American boys become friends during a three-day stint in an after-school suspension. They were both involved in two unrelated incidents with the same person, the resident menace at Alain Locke Middle, Tariq Molten. Robeson Battlefield is from a two-parent household, where both parents are highly successful and educated. Academic achievement, social consciousness and responsibility are reinforced daily in the Battlefield household. Pacino Clapton comes from a single parent household; his mom works two fulltime jobs. Pacino has a ton of responsibilities, including cutting hair to help pay bills, and taking care of his twin five- year-old sisters. During this three-day span, the young men visit each other's home, and chop it up on a multitude of subjects including respect of self and Black women, the dire state of hip-hop music, the use of the dreaded N word, and masculinity. Before long, the three boys are on a collision course. And when they do intersect, their lives are changed forever. We Could Brothers addresses the presence and lack of positive male leadership in the home, and how it dictates the way young African American men view themselves, each other, and the world around them. Mentorship, brotherhood, and an emphasis on that old adage each-one-teach-one; are very real and tangible themes in this middle grade literary masterpiece. First published by Scholastic, Inc. Re-released by Just Us Book under its Sankofa Imprint.

Derrick Barnes is the author of The Making of Dr. Truelove, which was an American Library Association Quick Picks selection and has been named by the New York Public Library as one of the 100 Best Books for the Teen Age. He is also author of the popular Ruby and The Booker Boys series. Derrick and his wife, Tinka, reside in Charlotte, North Carolina with their sons.

In after-school detention for the first time, high-achiever Robeson meets and bonds with a fellow eighth-grader, tough Pacino, who hides his good grades and laughs at Robeson s geeky ways. They both hate their gangster classmate, Tariq, who threatens them, and tension mounts as they begin to wonder if Tariq has a gun. Weaving together the very different lives of three African American kids at school and home in their Kansas town, this fast-paced novel will grab readers with its anger, humor, and tenderness. Pacino has never seen his dad, and with his brother in prison, he cares for his little sisters while his mom works two jobs. In total contrast, Robeson lives in a huge, fancy house, while Tariq, shuttled between group homes, has almost nothing. Despite the many confrontations, there is no obscenity; in fact, Robeson is passionately against blacks using the n-word. The messages are occasionally heavy, and Pacino speaks for the reader when he tells Robeson to quit quoting his perfect dad. Still, even reluctant readers will be swept up in this contemporary teen drama. Booklist

SKU:
We Could Be Brothers