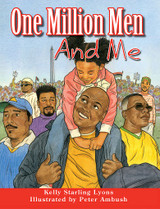 SKU:
One Million Men & Me (Paperback)

One Million Men and Me

On October 16, 1995, Black men of all ages, religions and backgrounds gathered at the Lincoln Memorial in Washington, D.C. They were there on a mission - to mobilize and motivate, as part of what would become the largest event of its kind in U.S. history: the Million Man March. The Million Man March was a movement like no other. It brought together Black men who were committed to inspiring and empowering themselves and each other to make positive and lasting changes in their families and communities. The March was widely covered by news media across the country and the world. Now, this new picture book shares the story of the March in a new light: through the eyes of a little girl who was with her father the day Black men made history.

Journalist Lyons, who attended the Million Man March in Washington, D.C., in 1995, imagines the historic event through the eyes of a child she saw there. The tone is strongly inspirational, and Ambush s realistic double-page spreads, which make particularly good use of close-ups, portray the child and her daddy against the big scenes of the crowds united and strong. Words and pictures celebrate the diversity of individual black men, doctors, garbage men, students, homeless people and retirees, and their joining together in purpose and peace. The sense of tradition is apparent in the metaphors of quilts, a rainbow, and more, and so is the child's excitement about being part of the history, a princess close with her loving dad. A lengthy afterword talks about the speakers and the connections with the 1963 March on Washington.Booklist

Lyons relates the events of the 1995 Million Man March as told from the point of view of a girl who accompanies her father to Washington, DC, for the historic gathering. She begins, My cousin, Omari, said no girls were allowed. But Daddy took me . . . The description of the faces as a rainbow of chocolate, graham cracker brown and cream is accompanied by a spread depicting men of different ages, dress styles, and color, but their expressions of pride and hope are the same. Ambush successfully varies the illustrations to include both warm close-ups of father and daughter and wider views of the speakers she sees while sitting on her dad's shoulders. An author's note includes additional historical facts about the march. This story might prove useful as an introduction to black history or to engage students' interest in social issues. School Library Journal

SKU:
One Million Men & Me (Paperback)