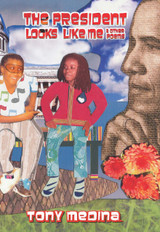 In 2008, the election of Barack Obama as the first African-American to serve as President of the United States, marked a pivotal point in the history of a nation too often preoccupied with race, color and identity. President Obama's re-election in 2012 underscored the important progress that has been made despite challenges that seem to not want to go away, such as racism, sexism and inequality.

Millions of people around the world have been inspired by Mr. Obama's historic victories and his personal story of determination and success - especially children of color. In The President Looks Like Me and Other Poems, Tony Medina celebrates the diversity that President Obama symbolizes through poems that are multicultural in scope and wide-ranging in style. With distinctly urban settings and an urban flavor, the collection covers a myriad of themes that include childhood, family, friendship, identity, spirituality, social justice and Hip Hop. Medina's poems realistically capture the impact of what it means to be young in a complex world is explored. Yet, they offer hope that resounds more prominently when a child of color can say, the president looks like me.

Medina taps into the hopes, dreams, and lives of young people of color through 44 poems divided into 6 sections. Wide-ranging in their variety and styles, these selections are specifically multicultural and distinctly urban in setting. The poems range from the everyday "Ode to Potato Chips" to the profound "Haiku for Three Voices" to the raw "At the Bottom of His Father's Secret Drawer," about a gun that makes its way to school. The pages are unadorned except for the addition of a cover fragment at the opening of each section. This is poetry meant to be read aloud. The author includes a discussion of the different forms he's chosen, definitions of vocabulary used, and notes about historical and musical figures who appear in the verses. Readers who enjoyed his Love to Langston (Lee & Low, 2002) will appreciate this collection. For tweens and young teens who are looking for poetry with real voices and relatable experiences, Medina's down-to-earth tone and urban flavor might just hit home. A great offering for reading aloud and sharing with others, this collection may inspire young poets to put their own pens to paper in response. School Library Journal